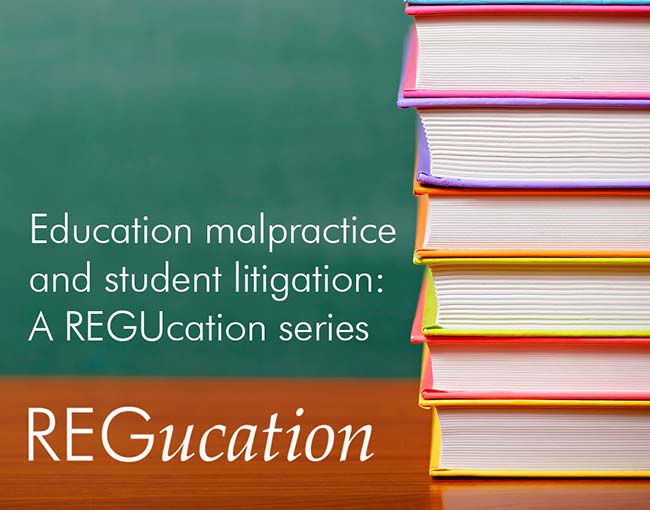 Note: if you missed the first two installments in our series, you can find them here:

The goal of any motion to dismiss should be to articulate clearly the essence of the claims to expose them as requiring a review of educational policies, programs, principles, theories, or the implementation thereof. The motion will often need to re-frame the issues and facts with the goal of informing the court of the interplay between the allegations and the educational policies implicated.

For example, a student may contend that he or she was defrauded when a school added a required course to its curriculum. Before considering the merits of the claim (there may be many good contractual defenses), first consider a strategy for articulating this claim as invoking an educational policy, program, principle, theory or implementation thereof. In this example, the claim clearly invokes the school’s policies surrounding academic and programmatic standards, student progression, and graduation requirements. This claim, when viewed in light of these policies, goes to the heart of what a school does and would require the court to step into the shoes of the school administrators and substitute its judgment for the school’s. To help facilitate this process, pull out the institution’s policy handbook and thumb through it with the claim in mind. An institution will likely find countless school policies, procedures, and principles that relate to the claim at hand.

This type of strategy paid off in Gillis v. Principia Corp., 111 F. Supp. 3d 978, 985 (E.D. Mo. 2015). There, the plaintiff sued Principia College for breach of contract (among other theories) for the school’s alleged failure to live up to the principles it espoused in its written policies. The defense argued that the claim was “merely a thinly veiled claim for educational malpractice.” The federal court agreed, and dismissed the claim because it went “toward the alleged poor quality of her educational experience in terms of [the school’s] alleged failure to conform to its expressed Christian Science foundation.” Id. at 985. Thus, it may often be necessary for the defense to expose the true nature of the student’s claim to show the judge that it’s nothing more than a new version of a defunct cause of action.

All this having been said, if the basis for a motion to dismiss is not clear from the face of the pleadings, consider saving “ammunition” for a strong motion for summary judgment following the plaintiff’s deposition. This avoids making bad law for the case and for higher education, and allows the legal team an opportunity to develop a solid factual record supporting dismissal.

Kim Bousquet is a partner in Thompson Coburn’s litigation practice. Formerly General Counsel for the Missouri State Board of Nursing, her clients include postsecondary institutions and businesses offering higher education services. You reach Kim at (314) 552-6099 or kbousquet@thompsoncoburn.com.