On May 1, the Federal Aviation Administration (FAA) granted Yamaha Motor Co. Ltd., a commercial exemption under Section 333 of the FAA Modernization and Reform Act of 2012 for flights of its RMax Type II G unmanned helicopters (RMax) for use with agricultural operations. It is a significant milestone because the RMax, at more than 200 pounds fully loaded, is the first UAS approved to weigh more than 55 pounds, the threshold for small UAS aircraft in the United States. 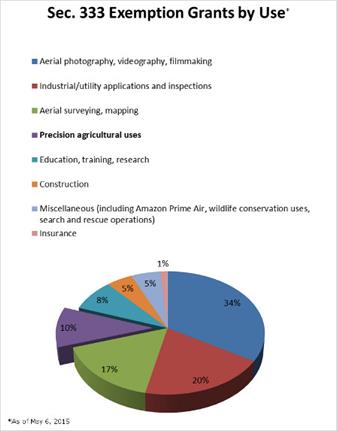 Because this UAS is designed to apply chemicals to crops, it must be powerful enough to carry significant payloads. The UAS must also be nimble enough to operate and spray over difficult terrain. In addition to the RMax, Yamaha seeks to introduce a similar model (the Fazer, with a larger practical payload) into the U.S. market.

Unlike most of the Section 333 grants, the approval for the RMax was lengthy and not issued in summary fashion, whereby the FAA approves applications primarily based on similarly situated entities and approved aircraft. Instead, Yamaha’s petition had been developing for nearly a year. In June 2014, the company first applied for a Section 333 exemption for domestic use of the UAS, which has operated as a precision crop sprayer in Japan for nearly 20 years. The UAS has logged over 2 million flight hours in international uses, and the FAA found the average mechanical failure rate from 2009-2013 was 1 per 46,500 flight hours.

Yamaha’s Section 333 petition generated several public comments from aviation organizations, some due to the RMax’s significant weight, dimensions, and power. The Air Line Pilots Association International, for example, noted the UAS’s features are more akin to a larger, manned helicopter.  The FAA saw past those concerns and objections, however, finding the UAS posed no adverse safety threat to the civil air system if operated pursuant to the conditions in its Section 333 exemption.  The RMax is not permitted to fly faster than 45 miles per hour and is subject to many of the same operating restrictions that apply to smaller drones approved under Section 333.

Yamaha’s exemption could open up more legal avenues for farmers to improve crop management from the air. While approximately 10 percent of Section 333 grants are being approved for agricultural use, there had not been a grant for drones capable of hauling and spraying significant amounts of pesticides and other chemicals. Previous grants for agricultural uses have mostly been for imaging or analyzing crops and land. Now that a capable, proven sprayer is on the scene, farmers may increasingly turn to drones as allies in the sky for crop management.