Home > Insights > Publications > And on that farm he had a drone: UAS deployment in precision agriculture

And on that farm he had a drone: UAS deployment in precision agriculture 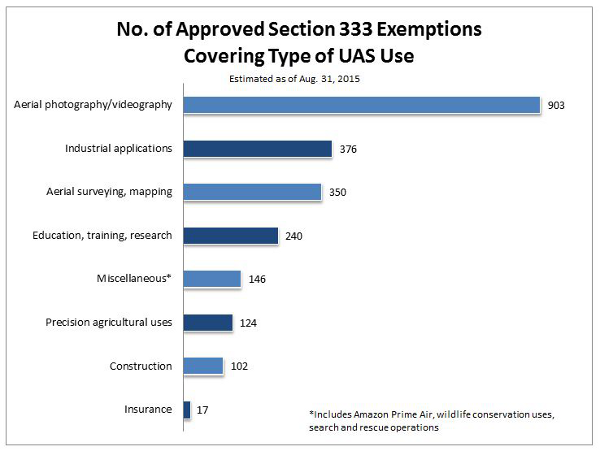 Unmanned aircraft systems (“UAS,” or more commonly, “drones”) have become a valuable agricultural decision-making tool on the 21st Century farm. American farmers increasingly look to the skies to improve their crops and operations. Understanding UAS regulations that apply and a drone’s potential applications may become critical for future farmers to stay on the cutting edge of agriculture.

According to FAA interpretation, viewing a field with a UAS to determine whether crops need water when they are grown for personal enjoyment does not require FAA authorization; however, viewing a field using a UAS to determine whether crops need to be watered when they are grown as part of a commercial farming operation does require FAA authorization.  Currently, the only viable avenue for authorization of commercial drone use is through the FAA’s Section 333 exemption process. This process was put in place by the FAA Modernization and Reform Act of 2012 and requires the FAA to determine if certain UAS may operate safely in the national airspace system. The application process takes approximately 120 days, although this timeline varies considerably depending on the planned use and whether other applicants have been approved for similar exemptions using similar aircraft in the past. In issuing an exemption, the FAA approves the altitude, speed, and general flight parameters for the UAS operation, along with the type of drone the applicant wishes to fly. To date, the FAA has issued more than 1,400 exemptions, approximately 130 of which are to be used specifically for precision agricultural purposes.

The marriage between drones and various agricultural technologies is a natural fit. A wide variety of UAS are capable of toting multi-spectrum sensors that can map land and detect a plant’s water consumption, relative heat, height, vigor, and productivity. The ability to fly several hundred feet in the air, low to the ground, and fast or slow — depending on the need — provides considerable flexibility for gathering a wide range of data. Several companies are developing integrated software and hardware applications specifically for agriculture so that farmers can use this data to improve crop yields and compare year-to-year productivity. Farmers can be more productive if they know where to plant when to switch seeds and apply fertilizer, and are able to identify malfunctioning irrigation. Some UAS are capable of creating detailed 2-D and 3-D maps so farmers can better manage their land and track development over time.

Drones may also become more popular as substitutes for manned crop-dusting aircraft. For example, on May 1, 2015, the FAA granted Yamaha Motor Co., Ltd. an exemption for flights of its RMax Type II G unmanned helicopters (“RMax”) for use with agricultural operations. The RMax aircraft had previously been operated as a precision crop sprayer in Japan for nearly 20 years. It was a significant milestone because the RMax, at more than 200 pounds fully loaded, is the first UAS approved to weigh more than 55 pounds. After all, if a UAS is to apply chemicals to crops, it must be powerful enough to carry significant payloads yet nimble enough to operate and spray over difficult terrain. Unlike most of the Section 333 exemptions granted, the approval for the RMax was lengthy and not issued in summary fashion. (The FAA typically approves applications more quickly because the majority of them are primarily based on similarly situated entities and previously approved aircraft.)

UAS can also be used to provide farmers and ranchers with an additional security tool to manage their properties or livestock.  On April 16, 2015, for example, the FAA granted Jackson Family Wines’ (“JFW”) Section 333 exemption to operate UAS to conduct surveillance over approximately 35,000 acres of private property in California and Washington on which JFW grows grapes and conducts its wine production business.  In its application, JFW stated that it wished to use UAS to augment its current “human ground surveillance” security team since large areas of JFW’s farm land was susceptible to trespass and illegal activities.  Specifically, JFW indicated that security teams often found signs of trespass in the form of unauthorized parties using JFW’s irrigation and water systems for marijuana plant harvesting.  JFW asserted that using UAS to conduct initial air surveillance, instead of security personnel on the ground, would keep the security detail from having to directly confront the trespassers engaged in illegal activity.  The UAS would be used to take still and video photography of activity that could then be shared with law enforcement for further investigation if needed.

Agriculture is big business and the people involved in this business are always looking for the best tools available to ensure yield, safety, and security of their land and products while keeping costs to a minimum.  UAS may just be the best tool for this job, but you’ll need a Section 333 exemption to hop aboard.