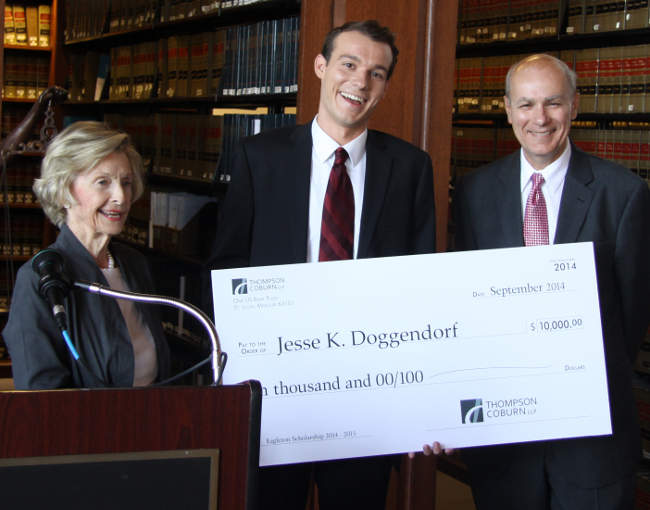 Jesse graduated from Saint Louis University in May 2014 with a B.A. in political science. A native of Dittmer, Mo., Jesse successfully campaigned for formal equality-based policies at his high school and called for school-wide classroom discussions about LGBT issues. At SLU, Jesse served on the Diversity Leadership Cabinet, where he initiated dialogues about LGBT issues throughout the campus community. As a senior, he also wrote a paper, “Lockean Privacy and the Courts: An Avenue for LGBT Rights in America,” and presented it at conferences at SLU, Butler University, and Illinois State University.

“I’ve always believed that progress comes when people attempt to understand each other and the individual qualities we bring to the table,” Jesse said at the scholarship presentation. “Senator Eagleton embodied these principles and took it one step further while representing the people of Missouri and Thompson Coburn. I will strive to model Senator Eagleton’s commitment to community and helping others."

Mrs. Eagleton shared that the timing of the presentation held a significant meaning as it marked the seventh year since Senator Eagleton’s passing. She congratulated Jesse and thanked Thompson Coburn for honoring his memory with the scholarship.

Minogue shared his memories of Senator Eagleton with those in attendance. “Tom Eagleton was a remarkable individual, a true renaissance man, a brilliant lawyer, a tremendous people-person, and one of the best public speakers I’ve ever seen,” Minogue said. “He took great pride in being a lawyer; he knew it was a noble profession. He cared about young people, and about diversity in our society and profession. Our Diversity Committee decided that the best way to honor him was this scholarship program."

Washington University Dean Nancy Staudt congratulated Jesse and said she was happy to participate in the presentation as one of her very first duties as the new dean of the law school.